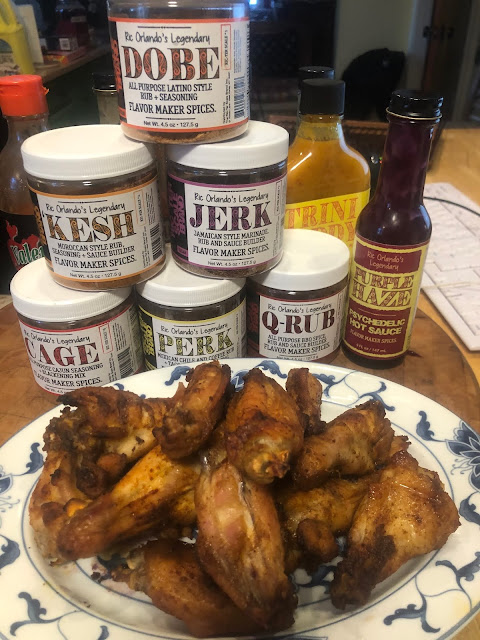 Ric Orlando's DOBE seasoned No Fry Chicken Wings Another Fabulous Ric-Ter Scale Brand Flavor Maker Spices recipe Ric-ter Scale Brand sauces and Flavor Maker Spices are all you need to ROCK any game! This is the way we made the WINGS at my New World restaurants for years. We relied less on frying and more on marinating and roasting. We did give them a quick dip in the fryer before serving just to crisp them up, but that is not crucial.  (By the way, this recipe works great with cauliflower too, the only variation is to toss with a little oil as well as the lime and DOBE!) FYI: I have never been a crazy fan of basic Buffalo Wings--ok I admit it, so shoot me.  I mean I love the idea, but too often the chicken itself was tough and rubbery. Why? Because in a normal bar kitchen, unflavored wings are fried in crappy GMO oil, leaving the chicken itself to be, shall we say, less than delish.  So it is the sauce that carries the day. But what if, just if, the chicken itself can be just as

Ric Orlando
I cook OLD SCHOOL, with respect for tradition and modern at the same time. I tell you the details and the reasons you need. I cook like a badass and I can show you how to dish by dish if you subscribe to my channel About me: Ric Orlando's Potato Latkes Beat Bobby on the Food Network’s and he also won on the show Chopped twice including an elimination competition in the first ever Chopped Champions. In the 2013 World Food Championships, Next Top Product Category, his Eggplant “Meatballs” won the top prize for the Northeast region. He also has appeared over a dozen times on the NBC TODAY show, PBS’s Simply Ming, NPR, Discovery, MTV, Sirius Radio, as well as many other regional media appearances. Ric hosts a popular podcast "We Are Upstate. NY"